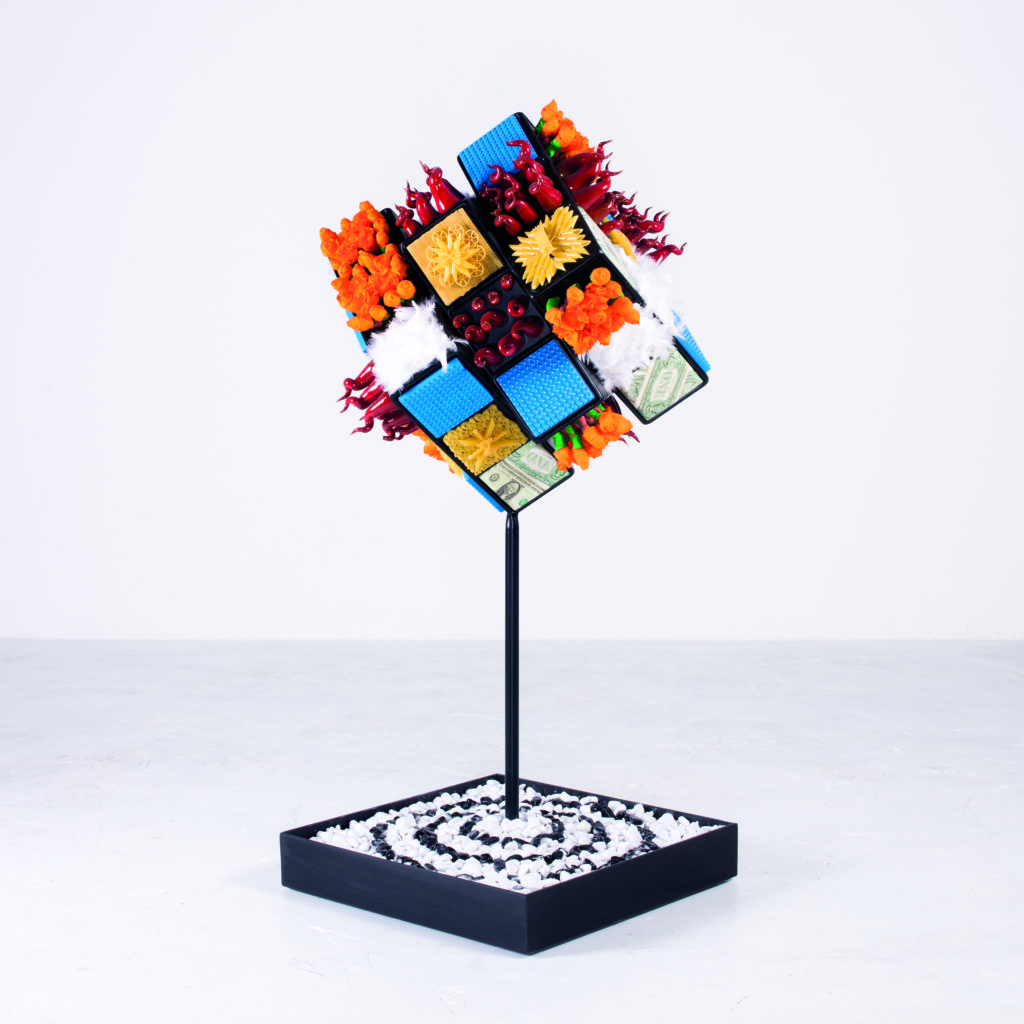 This artwork, through the famous Rubik cube’s shapes and colors, exemplifies some of the many factors that insist in people’s life to assure them a quiet existence. The six colors concatenation of this “magical cube” represent, in some ways, the contemporaneity of those elements that stands out the life.
Richness, wisdom, luck, taste, softness and keep young, for instance, are just some of the many factors that we have been living every day, even unconsciously. The biggest mistake is thinking that those elements, which are very different, don’t have any kind of bound. The artwork, with a simple glance, wants to demonstrate just this: in which way the factors that characterize our life are tightly connected by a single common resultant.

Red: Luck is blind but bad luck sees very well. Who of us don’t expect that in our life there is a bit of healthy luck? A neapolitan is also superstitious and so a symbol like horn is perfect.
Green: Moneys don’t make happiness but having them in its right amount isn’t bad at all! Richness as much as its venial representation is necessary for human progress, even though of course there is also the spirit’s richness but you can’t buy it with Dollars for sure.
Yellow: Indeed taste is a necessary factor to observe, create and judge everything that surrounds us, both material and immaterial things. Whereby without the physical and metaphysical taste you can’t appreciate the universe’s immensity like a simple pasta dish.
Orange: I like thinking that the fascine is that thing that distinguish a handmade craft from an industrial one and then did you know that the orange roses represent just that? Now you know.
White: Life, as much as it could be complicated, has to be faced with softness. Therefore a feather can describe that mental welfare sense that you achieve when you live with less ballasts.
Blue: Who of you have ever felt for a while like the happiest person in the world when during the childhood you played with the famous Lego? Even though most recently they have been replaced by electronic games those small bricks perfectly represent the capacity to keep young both body and mind. Who can see in Lego’s pieces only a child game could consider himself a boring adult.

Therefore, the binomial chromatic-conceptual of this executing cube allows us to understand easier the contemporaneity of the factors and variables that exist in everybody’s life.
Each person represents a world that is divided in many others. The artwork wants to interpretate this uniqueness in a pop way: each one is himself essence. Every day life forces us to react with actions that generate typified factors such as luck, power, fascine and many others that make us unique human beings in the world.
This Rubik wants to represent through its usual colors this very factors that being mixed in a permanent way, according to an unrepeatable combination, decree the individual’s uniqueness symbolized by the working cube.
But the artwork doesn’t want to stop to a close concept, indeed the black stones in concentric circles simulate the movement of the water in a pond when a rock is thrown into it to indicate that each one essence propagates itself infinitely to the next.