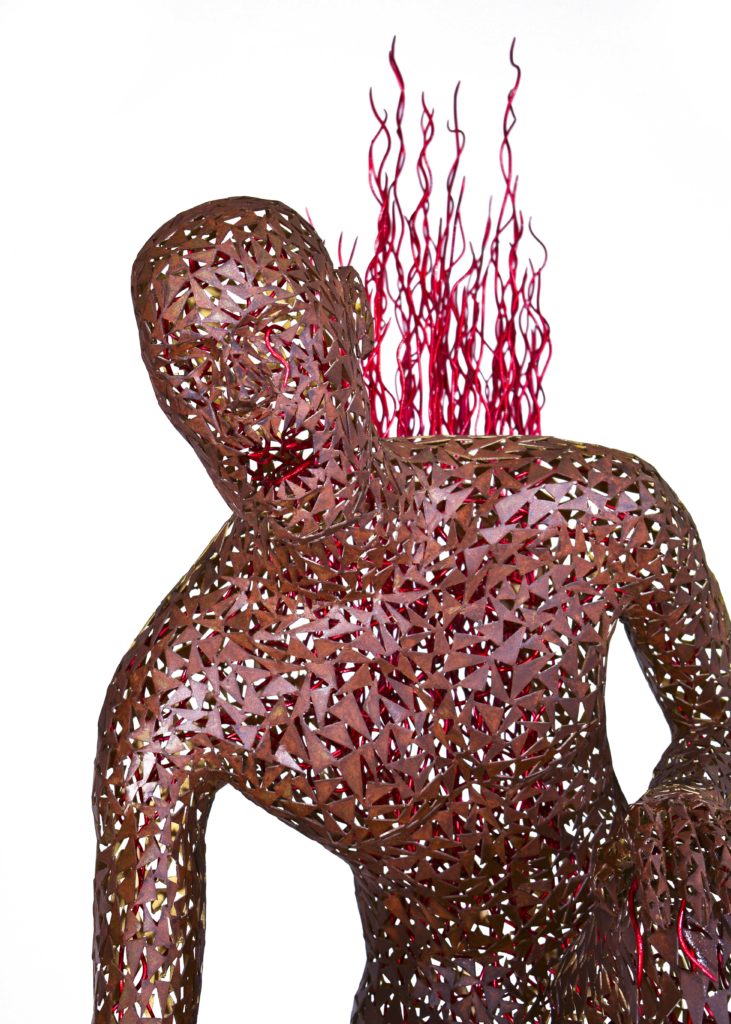 Materials
Polished iron rebar and layer
Base in brass and silicone

A kneeled man, full of a deep sense of loss and solitude. An interior emptying that contracts his face in an inhuman scream, filled of panic and deep confusion.
The soul leaves its terrestrial dimension and evaporates from a used body, abraded by the rust of a suffered and intense life. An individual that nevertheless doesn’t stop shining of an interior light, symbol of strength and willfulness.
You raise up to the sky, the otherworldly where we suppose that the human being has his life beyond death, that bodily dissolution, where it becomes whole with the unknown.
I think of floating souls in the Mediterranean sea who doesn’t forgive, suspended between the sea and the sky, one step closer to a land too difficult to reach.
If these human beings, like us, have a soul, how it would it be? Which weight? Would it be soft, would it leave a sign?
Story goes that a few split second after death, the body’s weight is less than some grams, 21 to be exactly, the weight of our apathy before each unfair death.
Who knows if the sense to this evil could have its roots in the chance to trespass to a better life, free from terrestrial bonds, defined and limited, to embrace other more infinite and shapeless.
“How many lives do we live? How many times do we die? They say we all lose 21 grams at the exact moment of our death. Everyone. And how much fits into 21 grams? How much is lost? When do we lose 21 grams? How much goes with them? How much is gained? Twenty one grams. The weight of a stack of five nickels. The weight of a humming bird. A chocolate bar. How much did 21 grams weigh?”.