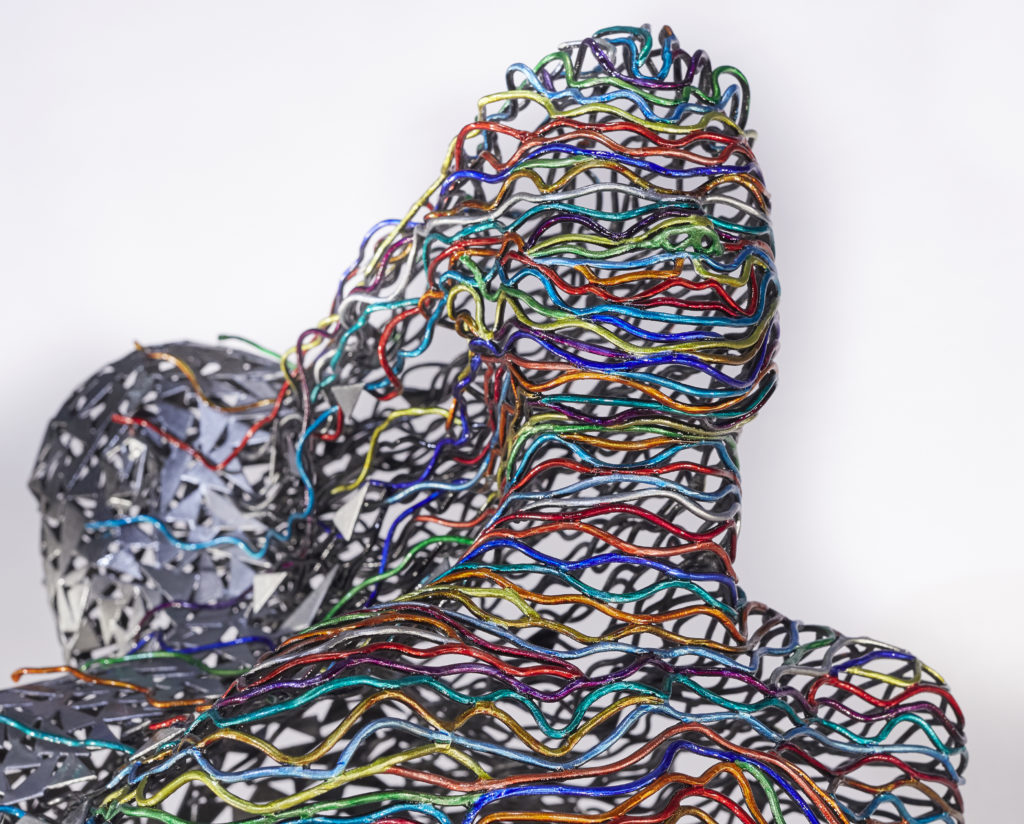 I love you…and if you don’t want me anymore I’ll kill you.
You’re mine, damned mine, I want to have you, I want to possess you and if you don’t want me anymore, I’ll kill you.
Two lost souls in a unique body or two bodies and a soul?
In front of us you can see a shared love, desired, not reciprocate, denied, that kills or just imagined. An absolute and inseparable passional osmosis.
On one side a man, as sharp as his static appearance, grounded on his beliefs and mental superstructures which try to infiltrate inside a woman softness, conversely with lively colors, who tries to move towards a change that could give new lifeblood to her irony veins.
She looks like a filtered light, the color’s fan part of a prism embodied by the man.
His arm tries to hold her, bonds to himself, but she tries to escape to that grip which would flatten her, shade her color’s variety.
Though, in this dance made of conflicting movements, the woman feels an uncontainable positive feeling for her attacker and she demonstrates it with her pigmented filaments which are extended on the man’s body. So a delicate psychological dependence status, well known as Stockholm syndrome, towards the one you love but hated at the same time, just like after all you always want come back at the period when everything was better.

A morbidity that bares their hearts and keep them going unified through an inseparable bond with the death of one of them or both, because loose themselves would mean giving up and abandoning to a misery and vacuity’s destiny.
They escape from themselves: one obsessed from the possess and fear of loneliness, the other from the unconscious vocation of the self-harming and obedience.
However “Odi et amo” is an oxymoron that represents the entire work, as it would say:
If you are going to declare war to me, I will love you as well.